No Fowl Play: Why US presidents pardon turkeys on Thanksgiving President Joe Biden, accompanied by Ronald Parker, Chairman of the National Turkey Federation speaks next to Chocolate, the national Thanksgiving turkey during a pardoning ceremony at the White House. AP

What is Thanksgiving without turkey? Well, that’s how it is in the White House.

Today (24 November) is Thanksgiving and while every American household will carve into a turkey for dinner, the current US President will not have turkey meat on his plate.

On Monday, President Joe Biden pardoned the official Thanksgiving turkeys, named Chocolate and Chip, and jokingly said, “The votes are in. They’ve been counted and verified. There’s been no ballot stuffing, there’s been no foul play.”

He further said, “The only red wave this season will be if our German shepherd Commander knocks over the cranberry sauce at our table.”

According to a report by CNBC, both turkeys have been freed to live their days at the Talley Turkey Education Unit at North Carolina State University in Raleigh.

Joe Biden is not the first president to pardon his turkeys, he was merely following a tradition that dates back to Abraham Lincoln’s presidency and has been passed down to successive presidents of America.

Let’s take a closer look at the history of the turkey pardoning ceremony.

Thanksgiving Day is celebrated as a national holiday in the US on the fourth Thursday of November every year.

The history of the festival goes back to the 17th century. The first Thanksgiving celebration was held in 1621 when the Plymouth colonists, also called the pilgrims, and Native Americans of Wampanoag shared an autumn harvest feast. 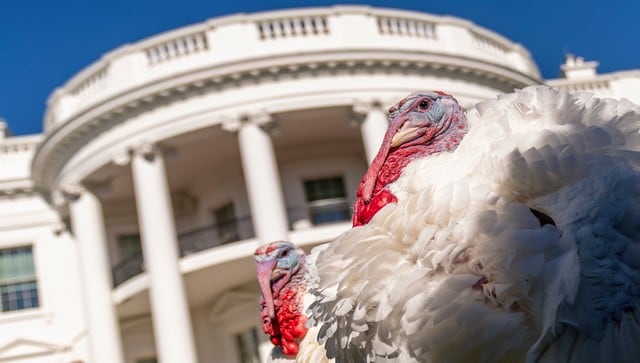 The first turkey was pardoned by Abraham Lincoln. AP

Since then, the day has been celebrated to mark the harvest season of the year that went by.

In 1623, pilgrims held the second Thanksgiving celebration to observe the end of a drought that had threatened the harvest of 1622, a reason why it wasn’t celebrated that year.

However, the festival was initially celebrated by individual colonies and states and it wasn’t until 1863 that the erstwhile President Abraham Lincoln declared Thanksgiving Day as a national festival.

Which president first pardoned a turkey?

It all started with Abraham Lincoln’s son Tad’s warm-hearted nature when he got upset by the fact that a live turkey would be slaughtered for a grand Christmas dinner in 1863.

According to White House reporter Noah Brooks’ reportage, Tad’s plea to save the bird was eventually taken into consideration and the turkey’s life was spared.

However, since the turkey was meant for a Christmas dinner, it did not merit becoming a Thanksgiving tradition.

Starting from the 1870s, a Rhode Island poultry dealer named Horace Vose began sending both Thanksgiving and Christmas turkeys to the president’s family to feast on. He remained the unofficial turkey dealer for the first family for almost 40 years. By 1914 during Ulysses S Grant’s presidency, suppliers from the entire of America started sending live turkeys to the president for the holidays.

In 1963, a turkey, who ironically and sadly wore a “Good Eating, Mr President” around its neck was pardoned by ex-President John F Kennedy. He reportedly said, “We’ll just let this one grow.” John F Kennedy gave up his turkeys in 1963. Wikimedia Commons

This is when Los Angeles Times reported the event and called the act a “presidential pardon”.

However, it wasn’t until 1989 that President George HW Bush made the tradition an annual thing. When animal rights activists crowded the White House to protest against the turkey presentation. To this, Bush said, “Let me assure you, and this fine tom turkey, that he will not end up on anyone’s dinner table, not this guy. He’s granted a presidential pardon as of right now.”

According to a report by Reader’s Digest, since then all presidents have been following in the footsteps of their predecessors to pardon turkeys on Thanksgiving. The task of picking the turkeys for the annual presentation has been given to the National Turkey Federation. The birds are chosen based on their appearance and temperament to be able to tolerate large crowds during the pardoning ceremony.

What happens to the birds after they are pardoned?

Donald Trump arranged a one-night, one-day stay at a swanky hotel in Washington DC for his two turkeys. The hotel room cost him $422. And although it is not clear if it was a coincidence or not according to CTV News, Trump’s predecessor Barak Obama had once stayed in the hotel.

After the pardoning ceremony is held, the turkeys are sent to spend the rest of their lives on farms so that they can retire for some “much-deserved rest and relaxation”.

Normally, the lucky birds are sent to a variety of locations like Virginia Tech’s Gobblers Rest exhibit and a farm in the same state named Frying Pan Farm Park.

This year, according to a report by Independent the turkeys, Chocolate and Chip will retire in the campus of Iowa State University where they will spend their days in comfort with fresh bedding, a heater, food and water until they eventually die of old age.

The pardoned birds have some life! It has also been reported that during the terms of Barack Obama and George W Bush, the birds were even sent to Disneyland for a meet and greet with the crowd before they were paraded down Main Street.

However, to the disappointment of many, the pardoned turkeys do not get to live a long life as all the love and care they receive in their homes eventually leads to their death as they grow bigger and bigger.

150 universities, 70,000 staff members: Why UK universities are going on their biggest strike