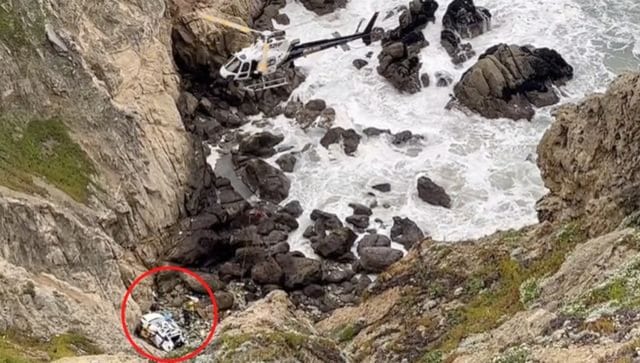 California: After miraculously surviving a deadly fall off a over 200-ft deep Californian cliff injuring three others including two children, a tesla owner has now been charged with attempted murder and child abuse after police authorities asserted that the crash was ‘intentional’, reports say.

Following the charges, an arrest warrant has been issued against Dharmesh A. Patel, of Pasadena, who is currently hospitalised for traumatic injuries, he received in the accident.

Reportedly, the revelation came after the California Highway Patrol spoke with eye-witnesses and gathered circumstantial evidence.

CHP Officer Mark Andrew said earlier on Tuesday that investigators did not believe the Tesla was on autopilot, while adding that the car’s driving mode was not a contributing factor” in the crash.

Around 10:50 on Monday morning, 911 callers reported that a car had gone over the “Devil’s Slide” cliff on State Highway 1 south of the Tom Lantos tunnels. California Highway Patrol officers were dispatched to the scene.

“We frequently go there to check on cars that have fallen off a cliff but most of the occupants in these don’t survive. This was a true miracle,” Coastside Fire Protection District/Cal Fire battalion chief Brian Pottenger stated.

In the midst of windy and rainy conditions, firefighters abseiled down the cliff while a second rescuer was lowered from a helicopter to help.

The passengers had to be extracted from the vehicle by first responders using “jaws of life” equipment.

This Tesla Model Y fell 300ft down a cliff in California and miraculously the four occupants, including a 4 year old and 9 year old, survived the crash, but with serious injuries. The family was airlifted to hospital. Hopefully they all make it through.pic.twitter.com/TlB7lALqWE

According to reports, the children, a 4-year-old girl and a 9-year-old boy, were pulled out of the back window while the adults were hoisted from the water’s edge and transferred to a Stanford Life Flight helicopter.

Patel and the second adult allegedly suffered traumatic injuries, while the two children were rushed to the hospital with musculoskeletal injuries.

Authorities did not say whether or not the passengers were related to Patel.

Patel is being treated at a local hospital for his injuries and will be booked into the San Mateo County Jail upon his release.

The investigation is still ongoing, according to Californian authorities, who stated that no additional information will be disclosed at this time.

As per the reports, the stretch of highway where the accident occurred has been the site of dozens of fatal accidents in recent decades in which people have driven off the road.

A tunnel designed to make the road safer was also opened in 2013. However, at least nine fatalities have occurred there since.

The California Department of Transportation stated in a report from 2021 that run-off-the-road accidents were more frequent in the area around Devil’s Slide than they were elsewhere in the state due to the condition of the pavement’s edge, the steep drop-offs, and the lack of permanent barriers.