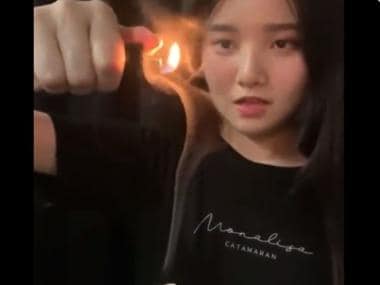 Science never fails to amaze people. It doesn’t always require a decorated laboratory to perform any science experiment. There are several easy science tricks that can be executed at home without much effort. In an era of social media, we come across many such mysterious events. Those would be difficult to explain if we don’t know the actual reason. Now, a girl has generated much buzz by reigniting a candle with the aid of its own smoke. Sounds unbelievable? A video of the experiment was dropped on the internet by the girl named Science Girl herself on her personal Twitter. From the beginning till the result, the process no doubt has astonished the viewers and the clip has gone viral.

In the video, the girl can be spotted standing infront of an illuminated candle with a paper cup in her hands. First, she put the flame out by covering it with the cup. Then, she immediately lit an ignitor. She held the flame close to the smoke coming out of the extinguished candle. In some seconds, the fire caught the smoke leading to the wick and eventually ended up lighting the candle.

Though it can seem quite bizarre, there is a basic science behind it. When you blaze a candle, you essentially turn the liquid wax into a flammable gas by vaporising it. All candle flames produced with conventional wax-based candles are fuelled by this evaporated wax. The flame on the wick is extinguished if you blow out the candle, but the evaporated wax in the air can still be usable. This vapour is invisible to the naked eye, but it will move in the same direction as the smoke. The unused wax vapour in the smoke will therefore ignite when you hold a flame near it.

Science girl also explained the same in the post’s first comment. She wrote, “See that white smoke when the candle goes out. That is paraffin wax vapour. It’s the unburned fuel particles, including unburned carbon. This fuel trail is flammable.”

See that white smoke when the candle goes out

It’s the unburned fuel particles, including unburned carbon, this fuel trail is flammable as seen here it can be ignited

Since being surfaced on the internet, some people managed to do the trick on their own. They also shared their respective videos in the comment section.

A person noted, “It’s easy. I did it on TikTok and it went viral.”

It’s easy. I did it on tiktok and it went viral🤣

Another user hilariously noted, “This is absolutely the kind of trickery that would’ve got you accused of witchcraft back in the olden days.”

This is absolutely the kind of trickery that would’ve got you accused of withcraft back in the olden days.

Here are some other reactions:

The 6-second clipping has amassed more than 10 million views so far on Twitter. It has also garnered nearly 105 lakh likes and thousands of retweets on the microblogging site.

From Ukraine, Karabakh to Pakistan: 10 conflicts the world can’t ignore in 2023