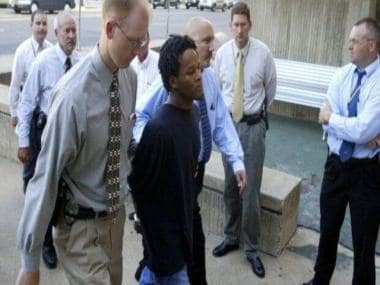 Washington: The 19-year-old daughter of a murder convict, who has been given death penalty for killing a police officer in the United States, has filed a petition in the court requesting to be with her father at the time he will be executed by a lethal injection.

Kevin Johnson (37), will be given the lethal injection at a prison in Missouri on November 29.

According to the US laws, people below 21 years of age cannot be present when such punishment is given. In 2005,
Kevin killed William McEntee, a police officer who came to raid his house.

At that time, Kevin’s daughter Khorey Raimi was only two years old.

The said petition has been filed by American Civil Liberties Union in the Kansas City Court. It says Khore should be allowed to be present there at the time of her father’s death.

Arguing the Missouri state law which does not allow witnessing an execution for people under the age of 21, the petition states that not allowing Khore to be with her father during his last moments, will be a violation of her constitutional rights.

According to the petition, Kevin also wants his daughter to be present at the time of his execution.

While talking to media, Khore said that She wants to pray for her father while holding his hand at the time death comes to take him.

Khore was just 2 years old when her father killed the police officer. Even in jail, Kevin stayed in touch with his daughter through mail, phone and letters.

Kevin’s lawyer has also filed an appeal requesting an overturn of death sentence in which the lawyer has blamed racism, as a major reason behind the death penalty given to him while the policeman he killed was white.

It was further said in the petition that Kevin’s age was only 19 years at the time when Kevin committed the murder.
Apart from this, the lawyers argue that he was also not mentally fit.

The Supreme Court has already ordered in 2005 that if a convict was a teenager at the time of the crime, then he should not be given death sentence, the petition argued.

In response, the Attorney General of Missouri said, “The family of the slain police officer waited too long for justice. Punishment should not be delayed any further”.

Pakistan used like ‘hired gun’ by US in war against terror: Imran Khan – Times of India