US worried as China undertakes rapid expansion of PLA navy 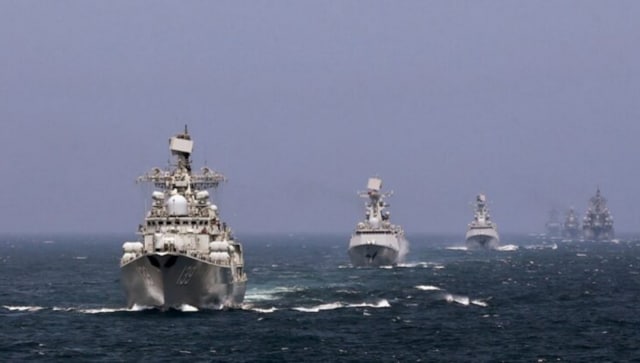 Chinese President Xi Jinping has set a target of inducting a total of 400 warships in the PLA Navy (PLAN) by 2025. Currently the Chinese Navy has 340 vessels Image Courtesy Agencies

Beijing: Even after building the world’s largest navy, the People’s Liberation Army (PLA) of China is still undergoing expansion at a breakneck speed.

Chinese President Xi Jinping has set a target of inducting a total of 400 warships in the PLA Navy (PLAN) by 2025. Currently the Chinese Navy has 340 vessels.

According to the Pentagon’s annual report on Chinese military power, China is building more modern warships. The Chinese Navy is working on expanding its aircraft carrier and logistics force to enhance its influence in the seas off the coast.

The Chinese Navy currently has two aircraft carriers deployed and the third is undergoing sea trials. China’s aim is to expand its military power on the surface of the sea.

By 2025, the People’s Liberation Army Navy (PLAN) is expected to grow from its current fleet of 340 to 400 ships, according to estimates from the Pentagon’s annual China Military Report released Tuesday. The report said that China has focused on making its naval force flexible and state-of-the-art. It is changing the platforms that are getting old.

The Pentagon reported that the Chinese Navy plans to mass-produce modern multi-role platforms featuring advanced anti-ship, anti-air and anti-submarine weapons and sensors by 2021. These include many such warships, which are unique in terms of power and modernity. The Chinese Navy last year transferred more than 20 old warships to the China Coast Guard. After this the total number of ships in the Chinese Navy was reduced to less than 255. The report states that by the end of 2021, the Chinese Navy is building an aircraft carrier, a guided missile destroyer and a new batch of guided missile frigates.

The US report states that the bulk of the expansion of Chinese military power on the surface of the sea is contained in two programs. These include the 7,500-ton Luyang III guided missile Type-52D destroyer and the 13,000-ton Type-55 Renhai class guided missile cruiser. The Luyang III destroyer is equipped with a dual-band active electronically scanned array (AESA) air search radar and a 64-cell vertical launch system similar to the MK-41 vertical launch cells on US warships.

Similar radars are also fitted in the Renhai class guided missile cruiser. These warships are equipped with 112 vertical launch cells. These include anti-ship cruise missiles, surface-to-air missiles, torpedoes and anti-submarine weapons, among others. According to the report, land attack cruise missiles and anti-ship ballistic missiles can also be installed in warships of this class. According to the South China Morning Post, the Chinese Navy has five Renhai class cruisers as of May.