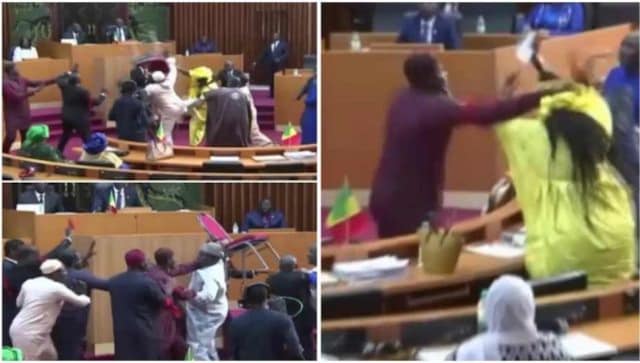 Amy Ndiaye, a pro-government legislator in Senegal, was slapped and then kicked in the stomach during a chaotic session of the National Assembly, sparking anguished debate about democracy in the country.

After a trial that began on December 19, MPs Mamadou Niang and Massata Samb were both sentenced to six months in prison.

They were also fined 100,000 CFA francs ($150) each and ordered to pay damages of five million francs.
Prosecutors had requested two-year sentences.

The brawl occurred on December 1, during a routine vote on the budget of the Justice Ministry.

Observations Ndiaye had made about Serigne Moustapha Sy, a powerful Muslim leader who backs the opposition but is not a legislator, served as the catalyst for the brawl.

The incident was widely condemned and sparked a debate about women’s rights. pic.twitter.com/brZTdbR0N6

Following the restoration of order, Ndiaye fainted and was taken to the hospital; her lawyer, Baboucar Cisse, stated that she was pregnant and feared she would lose her child.

She has since been released from the hospital, but she “remains in an extremely difficult situation,” according to Cisse.

The incident sparked a heated debate about parliamentary debate and attacks on women. It happened to coincide with a domestic violence awareness campaign.

Senegal is widely regarded as a model of stability and democracy in West Africa, a region rife with coups and dictatorships.

Legislative elections in July resulted in a virtual tie, forcing President Macky Sall’s party to form a coalition in order to remain in power.

“They will remain in prison pending an appeal,” Abdy Nar Ndiaye, one of their lawyers, told AFP.

Despite video evidence, they denied hitting the legislator.

Their lawyers argued that because they were lawmakers, they were immune from prosecution, but the court rejected this.

Ghana man reported to be world’s tallest at 9 foot six. But what’s the truth?